I was never given advice on how to budget or deal with finances, before long I realized that the debt was so high I was never going to get out of it…

When I started college, in the first couple of days there were people at the school getting you to sign up for a credit card.

I applied for a student Visa, everyone was doing it and it seemed like a very reasonable thing to do. 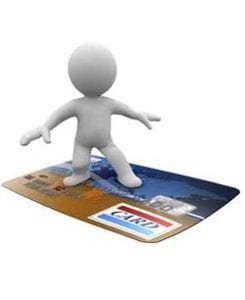 I planned to use it to pay for my books and travel expenses while I was in school. I had a part time job and my parents were paying for my tuition so it wasn’t a problem.

However, once I graduated I could not find work in my field and started applying for more credit to help me get by.

Once I was working I kept using the credit cards, plus a  line of credit to pay for unexpected expense like car repairs or I would use them at Christmas time or occasionally to take a vacation.

I was never really given advice on how to budget or deal with finances.  Before long I realized that the debt was so high I was never going to get out of it.

Even if I paid the most I could afford every month it would still take me years to pay everything off.

Getting Help with Credit

A friend of mine had a similar financial situation and told me she had filed a Consumer Proposal.  I’d never heard of this before, and wanted to learn more about it.

She told me to talk to a Trustee and recommended Kelly Dey at YanchDey.

I called the office, had a brief conversation with Kelly who explained to me how she could help me and invited me to come by the office.

Just that conversation gave me hope that there was a help and a way out of my debt.

Meeting with the Trustee

I had a meeting with Kelly Dey, she was very friendly, open and I felt like I’d had a friendly discussion with a friend.

I was worried they were going to pressure me into doing something, but it was nothing like that.

Kelly explained to me how a consumer proposal worked and how a bankruptcy worked and the pros and cons of both.

She told me to think about it and if I thought either of those would help me to come back and see them.

The next day I called and made an appointment to go back and she her again.

I decided to file for bankruptcy.

I liked the idea of a proposal, but I wasn’t sure if my current employment was going to be steady enough.

Once I got past the idea of being “bankrupt” it was pretty painless. I met with the Trustee to file all the paperwork.

I didn’t have any real assets other than my car which she explained to me was an asset that I could keep while in bankruptcy.

Once the bankruptcy was filed the creditors stopped calling and sending me collection letters.

I had to do monthly budgets for 7 or 8 months and after 9 months the bankruptcy was over.

It will be on my credit bureau for a few years, but I have already been able to get a credit card with a small limit which is all I need.

I don’t ever want to be under the stress of owing that kind credit card debt again, so I only use the card when I have to.

Going bankrupt wasn’t something I ever thought I would have to do or am necessarily proud of, but it was one of the best things I did.

I actually wish I had done it earlier to avoid the terrible stress I was under from all the bills.

I recommend anyone with financial issues to go and speak with YanchDey, they will help you.

Speak to an Insolvency Trustee

Questions about insolvency and bankruptcy? I invite you to call our office to speak to myself or one of our insolvency trustees.

We’re happy to speak over the phone or in-person at one of our offices.

Where you have questions or need some advice, please feel free to give us a call without cost or obligation.

★★★★★  Kelly and her staff made the bankruptcy process very easy.  It was a relief to my wife and I to have professionals such as these, very supportive. Thanks again

★★★★★ Some bad financial decisions including being laid off resulted in huge credit cards bills that we were never going to be able to pay off.  When we finally got fed up with the collection calls, my husband and I decided to get some help.  We decided on bankruptcy giving up many things we didn’t really need, and the counseling was great for us at our age.  It wasn’t easy, but we are much happier and debt free.  Thanks Again, would recommend.

★★★★★ I had a student loans of $14,000, and a balance on my credit card, then I received a letter of garnishment.  A credit counselor recommended I look into filing for bankruptcy. The bankruptcy trustee was easy to speak with and listened to me.  Together we discussed the pros and cons and options available.  The bankruptcy will pass, but I’m much happier without the burden of debt in my life. I should have gotten the financial counseling years ago.

★★★★★ Professional and friendly, on their advice I did a consumer proposal vs bankruptcy and will be completely out of debt in 2.5 years!!  Many thanks

★★★★★ They were completely upfront about what my options were, and gave me a clear cut plan about how I could stop the calls, bill collectors and bills that just kept getting bigger and bigger.  Filing for bankruptcy was not an easy decision but the trustee was there for me all the way.  Thanks Again!

Charles Pepin
15:51 25 May 18
Hello Kelly, Thank you for taking the time to explain the differences between bankruptcy and a consumer proposal. You made me feel very comfortable and at ease knowing I can make this work, and turn around my financial future and I really appreciate that.
Leeza V
09:05 08 May 18
Thank you !! I feel like a new person. I can finally sleep again after years of stressing about bills. The Trustee and staff at Yanch, Dey could not have been more helpful or given me a better solution!
Lane Carter
22:42 16 Apr 18
We were referred to you by our banker who said we would not go wrong choosing your firm. You have been compassionate and helped us along the way. It has been a long time and we are looking forward to a new beginning.
walter clare
15:20 10 Apr 18
I work with individuals, couples and families dealing with addictions and recovery. Over the years I have referred, many clients to Yanch Dey in order that they might get their financial affairs in order. The people at Yanch Dey are genuinely warm and caring about the people they serve. I conduct follow up interviews with all my referral clients. Without exception they express their deepest appreciation for the way they were treated. They are especially pleased with the results from their having been able to restructure their financial affairs. I do not hesitate to give Yanch Dey my highest recommendation.
Debbie C
17:41 04 Apr 18
Excellent customer care. Meeting set up very quickly, negotiated with my creditors resulting in me paying almost 1/2 of what I owed, taking me quickly out of debt. Have recommended friends and family to them and would do so again.
Darlene Allen
12:06 04 Apr 18
Yanch& Dey Associates I was very pleased the way they handled the negotiations with my creditors. I ended up paying a fraction of what I owed on my debt and had it payed off less then I expected.A few of my family members were in the same situation as me and were so happy with their outcome I find they have very good negotiating skills.YOURS TRULY D.A.
Ron Henderson
14:31 30 Oct 15
I would definitely recommend James Yanch and his staff. They were very kind and professional when handling my bankruptcy. My wife and I met with a few trustees and were very happy to find this office. We appreciate all their help.
Susan lee
04:59 03 Dec 14
GREAT SERVICE! We would HIGHLY RECOMMEND your firm to anyone! Thank you Jim, Brenda and staff. We are now headed in a positive direction again. You helped us understand our options and get our lives back on track.Susan & Trevor
Heather Marie
01:14 28 Nov 13
Mr. Yanch - I want to thank you for helping my husband and myself through this difficult process. We recently recieved our discharge and already things are improving for us. You were referred to us by a family friend and now we know why. You and your staff provided the compassion and understanding that we needed. Many thanks, H & R
Next Reviews Write a review

Speak a trustee about your debts.

We invite you to We provide government licensed trustees to help you with your personal finances.

Bankruptcy is for individuals, allowing for financial debt relief and counseling, while treating creditors fairly.